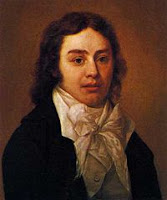 "In Xanadu did Kubla Khan a stately pleasure-dome decree..." wrote Samuel Taylor Coleridge early one morning before being inopportunely interrupted by a knock at his door. By the time he was able to return to the memory of what he later termed "a vision in a dream ... a fragment," a good deal of it had already slipped away, just like that "sunny pleasure-dome with caves of ice." It's believed this vivid and somewhat surreal fantasy was fueled by opium, but critics differ on the deeper meaning of the poem itself, written sometime between 1797 and 1816. There are six cases of Kubla Kahn in OhioLINK, making it a "low probability" typo on the Ballard list, but it's a useful object lesson here. The surname Kahn is a common one in the Judeo-Christian community; Khan is frequently found too, mostly among Muslims. Kahn + Khan returns 81 records, the vast majority of which appear to contain typos. Recently I memorized the poem Kubla Khan, as recommended by the book Committed to Memory, and especially enjoyed the line "As if this earth in fast thick pants were breathing" (it tends to put me in mind of David Letterman's production company World Wide Pants) and, less facetiously, the final stanza, which reads:

Weave a circle round him thrice,
And close your eyes with holy dread,
For he on honey-dew hath fed,
And drunk the milk of Paradise.

(Portrait of Coleridge, from Wikimedia Commons.)