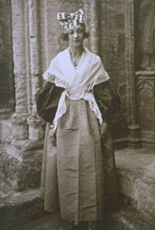 Jeanne Calment of Arles, France, lived from 1875 to 1997 and is considered the world's oldest person whose age can be officially verified. It seems her regimen comprised, in part, two glasses of port wine a day, two pounds of chocolate a week, and copious amounts of olive oil, taken internally and applied to the skin. She led a life of leisure and outdoor activity (riding a bicycle until she was 90: think Madame Capet in The Happy Orpheline), adopted a posture of unflappability (remarking once that she was interested in everything, but passionate about nothing), and enjoyed smoking cigarettes (which she gave up at 117 because she was too blind to get them lit and too proud to ask for a light). "I only ever had one wrinkle," she quipped, "and I'm sitting on it." Eldery appears eight times in OhioLINK and Ederly five.

(Jeanne Calment at age 22—a century to go!—from the Calment Gallery website.)