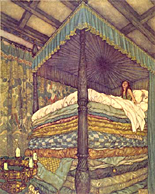 When my father was a little boy and a picky eater, he would often drop his peas down a hole in the leg of the dining room table. Out of sight, out of mind, it seems, although apparently there arose quite a clatter when the table was dismantled one day and the desicated peas were thus discovered. In any event, this was not the first time the lowly legume had been incorporated into a piece of furniture. I hated peas too, but I loved "The Princess and the Pea," in which the former's suitability as a royal spouse hung on her sensitivity to the latter, strategically placed beneath a pile of quilts on the guest bed. "So the prince took her to be his wife, for now he was sure that he had found a real princess, and the pea was put into the Museum, where it may still be seen if no one has stolen it..." Opea* shows up 17 times in OhioLINK, ranking it "high probability" for words like operations, opera, etc.

(Illustration by Edmund Dulac of Hans Christian Andersen's "The Princess and Pea," from childhoodreading.com.)

P.S. The great folk and blues musician Odetta passed away this week. Asked one time about being single and growing older, she told an interviewer: "Men are like peas ... I’ve had enough peas."