"The English winter - ending in July, / To recommence in August," wrote Lord Byron in the days before there was any talk of global warming. August was the sixth month of the ancient Roman calendar, and was thus called "sextilis," even after 450 BC, when January and February were moved from the end of the year to the beginning. In 8 BC, the month was named after Augustus to celebrate a series of mil 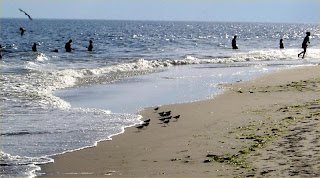 itary victories by the Emperor. Meanwhile, the months of September through December still bear the names of their original positions as the seventh, eighth, ninth and tenth months on the Roman calendar. On to the typo here - "Auguts" is on the D, or Low Probability, list in Typographical Errors in Library Databases, meaning that it was found more than once but less than eight times in OhioLINK at the time of its discovery.
Today's picture shows waders and seabirds enjoying the beach in a prior summer that did not feature 18 days of rain in a row. The beach is Point Lookout on the south shore of Long Island.
The original can be found at http://www.pbase.com/image/47290646.jpg
Posted by librarytypos at 6:08 AM