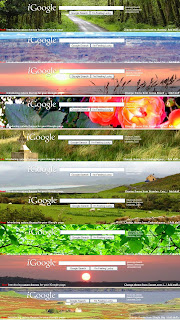 "Truth hurts; not the searching after - the running from." This according to John Eyberg, a man whose witticisms are found all over the web and even in several books. Otherwise, he is a bit of a mystery, with not so much as a Wikipedia page to tell his story. Serach is found on the D list of Typographical Errors in Library Databases, meaning that it was found at least twice but no more than seven times in OhioLINK at the time of its discovery. Indeed, it is found in nine records in OhioLINK this morning, but most of these relate to the biblical personage Serach. That brings up a point that we can't make enough - the words we highlight here are only possible typos in your catalogs. Each of these has to be examined individually before any record is changed.

Today's photo is a montage in honor of Google for adding an interface that makes it fairly easy for a non-programmer to create themes in IGoogle that are then added to the directory. This opens up theme creation to people like an old librarian with a large supply of digital pictures taken in the west of Ireland. The original is at http://www.pbase.com/terryballard/image/114751188
Posted by librarytypos at 5:55 AM