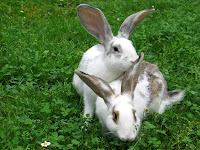 Be it resolved: Reslove* is found nine times today in the OhioLINK database, and is thus deemed a "moderate probability" typo on the Ballard list. RES can stand for any number of things, but I'm rather partial to the charmingly named Rabbit Education Society. These folks take a middle-of-the-road position on rabbit rights, as it were, clearly loving the hoppity little creatures, but demurring at the tactics and viewpoint of radical organizations like PETA. According to them, the commonest stereotype about bunnies is both puffed up and tawdry: "The RES does not recognize the term 'overpopulation' as it is inaccurate and has not been proven to exist and is a word meant to stir the emotions and demonize rabbit breeders as a part of animal rights propaganda." Hare today, gone tomorrow. I read that if you want to see more rabbits, you should plant soybeans. I rarely see rabbits. I bet I could learn a lot from them. Look what it did for Jimmy Stewart.