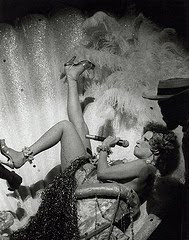 Before Barack Obama came along, Bette Midler was our favorite Hawaiian. And, just like Obama, Hawaii really is part of America, although there are undoubtedly some people who would doubt it. Hawaii became a state fifty years ago, on August 21, 1959. We found nine instances of Hawaia* in OhioLINK, along with two of Hawaai* and one of Hawia*. As Woody Allen once remarked: "Relationships are like sharks. They have to keep moving forward or they die." Let's save our Hawaiian records from death by typographical error and move forward by correcting all of these mistakes.

(Image posted to Flickr by JasonB, with the following caption: "The Divine Miss M. From her show 'Clams on the Half Shell.' She is doing Vegas now from 2008 to 2010. She will be in the remake of 'Jaws' where a shark is attacked by a great white woman.")