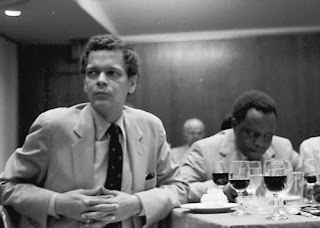 Julain (for Julian) is found nine times in OhioLINK, making it a typo of "moderate probability" on the Ballard list. Julian Bond was a founding member of the Student Nonviolent Coordinating Committee, president of the Southern Poverty Law Center, chairman of the NAACP, and long-time representative to the Georgia legislature. He was an English major in undergraduate school and has a wonderful—or, some might say, awful—way with words. (Is there a term for that, when words look like they should mean more or less the same thing, but in fact are generally used as opposites?) A few examples of Bond's bon mots include saying that the Republican Party used Condoleezza Rice and Colin Powell as "human shields against any criticism of their record on civil rights" and that George Bush's selection of John Ashcroft and Gale Norton, "whose devotion to the Confederacy is nearly canine in its uncritical affection ... appeased the wretched appetites of the extreme right wing." Nobody's really sure who coined the phrase, but I'm sure Julian Bond is one of those people who doesn't much mind what others say or write about him—as long as they spell his name right.