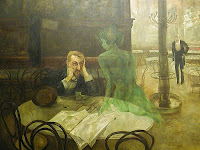 Frankly, I was a little depressed to find nary a typo for either Chicklist* or Checklit* in the entire OhioLINK database, but I quickly chucked all that and lit out instead in search of something for which Czechs might find themselves at the top of the list. So I checked and, sure enough, according to The Economist in 2006, Czechoslovakia ranked as the highest alcohol-consuming nation in the world. Adding a certain mystique to that half-impressive, half-depressing statistic is the land of Kafka and Kundera's longtime love affair with "The Green Fairy" (or la Fée Verte), the thujone-infused libation known as absinthe. Next time you're in Czechoslovakia, you might want to check out the world through green-colored glasses. (Or else you could just gaze upon a window display like this one in Prague.) There are two cases of Cheklist* and two of Chcklist* in OhioLINK, and 54 and five, respectively, in WorldCat.

(Viktor Oliva's "The Absinthe Drinker," the original of which can be found in the Café Slavia in Prague, from Wikimedia Commons.)