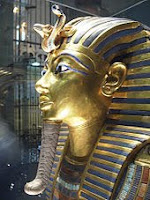 On this day in 1923, Howard Carter opened the sealed doorway to the tomb of Egyptian King Tutankhamun. The excavation of the tomb was plagued by several mysterious events that the media happily reported amidst speculation of a curse.

The first occurred directly after Carter first broke the seal, a few months earlier. Carter's pet canary, in his home, was eaten by a cobra. This was interpreted as a sign -- the Royal Cobra Uraeus (worn by Egyptian kings) broke into Carter's house on the same day he began to break into Tutenkhamun's "house" (the tomb).

The deaths of a few of Carter's team members fueled the curse speculations as well, though Carter himself did not die until long after he opened the tomb, in 1939.

Egpyt is a high probability typo for Egypt. But don't get too giddy in your corrections -- the various spellings of Tutankhamon that I used are all legitimate.

(Photo of the mask of Tutankhamen from Wikimedia Commons)