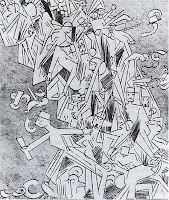 The French have an expression, l'esprit de l'escalier, which literally means "the wit of the staircase." It's the sort of clever comeback or spot-on observation that only occurs to you when it's too late, like as you're leaving a party, or on your way out of a room—i.e., on the staircase. It refers to both the process or the experience of this as well as to the remark itself; it's also known as "hindsight wit" or "afterwit." Oddly enough, "the wisdom of the staircase" comes up almost five times as often in a Google search, but really, it's "wit." If I could think of a wry or whimsical way of putting that, I would. (Maybe later!) According to Simon Barnes: "This affliction ... is one of the principal reasons why people become writers." There were 20 examples of Widsom (for wisdom) in OhioLINK today, and 164 in WorldCat. Our illustration is a witty take-off on Marcel Duchamp's 1912 "Nude Descending a Staircase, No. 2", which itself was intended as a satirical comment on the conventional aesthetics of the time.

("The Rude Descending a Staircase (Rush-Hour at the Subway)" by J. F. Griswold, published in the New York Evening Sun, March 20, 1913, from Wikimedia Commons.)