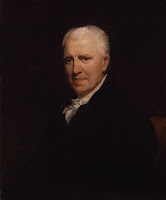 George Crabbe was born in Suffolk, England, Christmas Eve, 1754, and died on February 3, 1832. Crabbe was a poet and naturalist. Among his best-known works are The Village and The Borough—which was the basis for Benjamin Britton's opera Peter Grimes. (He is also the author of an exceedingly long poem entitled The Library.) Crabbe was friends with William Wordsworth, Sir Walter Scott, and other prominent poets of the day; Byron once called him "Nature's sternest painter, yet the best." (Clearly quirky, he was reportedly a tin-eared opium eater for whom Jane Austen bore a secret crush!) In addition, Crabbe was a noted coleopterist (beetle fancier) and beloved clergyman. A monument to his memory in St. James Church reads: "Born in humble life, he made himself what he was; breaking through the obscurity of his birth by the force of his genius; yet he never ceased to feel for the less fortunate..." Crabbe also reveals an open mind and gentle wit in the quote: "Habit with him was all the test of truth. It must be right: I've done it from my youth." There were 16 cases of Yout in OhioLINK: one was a personal name; three seemed to be examples of reggae/rock patois; two were typos for youth; one was one for you; three were otherwise correct in context; and the rest were typos for your. Remember: Yout is wasted on the young. So don't you lead your youth astray with this our typo of the day!