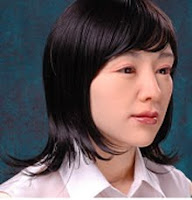 A few months ago, my library sponsored a lunchtime talk by Julie Wosk, author of the book Alluring Androids, Robot Women, and Electronic Eves. Such cybernetic creatures are ubiquitous and, despite having missed the talk, a couple of examples immediately spring to mind: "Rosie" on the cartoon The Jetsons (Rosie the Riveted?) and the malevolant "Maria" in the 1927 Fritz Lang movie Metropolis. And then, of course, there are sex dolls, which aren't really robots, since they pretty much just lay there, but that's plenty, apparently, for most of their panting partners. (These girls aren't easy to pick up; they weigh as much or less than a comparable human, but feel a lot heavier.) I actually know somebody who built himself a (platonic) "robot" one time and gave it his first name spelled backwards. If I had an e-me, I think I'd name her "Lorac," which was my own cool reverse-engineered name as a kid. (It sounds pretty robotty, plus it reminds me of "The Lorax" in my favorite Dr. Seuss book!) There were 47 examples of Everthing* in OhioLINK, and nearly 500 in WorldCat.

(Photograph of EveR-2, a female android developed by the Korea Institute of Industrial Technology and demonstrated to the public in October 2006. It is 165cm tall and weighs 60kg.)