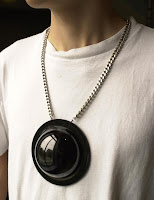 I recently rubbernecked this typo in a notice about a lost necklace at work. And you know it does make a certain kind of sense: the necklace is currently "neckless." In any case, I hope that that person finds her jewelry; in the meantime, we found just one of these in OhioLINK and 26 in WorldCat. Among the latter, around a dozen or so were not typos, but rather correctly spelled modifiers for mutant zebrafish and the like—along with jars, teapots, and various other vessels lacking necks. It was also rather fun to learn that the word necklace can sometimes refer to such things as birds, shells, and seaweed. Today's typo is nothing to lose your head over, but do take a look around your catalog for it. Our illustration may require a bit more explanation. According to the photographer: "This picture, of a necklace webcam, was taken in a stairwell in a building on St. George Street in Toronto, where there was a nice large and well-defined window. This seemed to be the best place to photograph the dome and show its shape nicely. The sousveillance dome is a kind of Situationist critique of surveillance, in the manner of an inverse surveillance. By re-situating the everyday familiar objects of ubiquitous surveillance ('eye in the sky') down at human level, we reverse the Sur (French for 'above') to Sous (French for 'below')."

("Sousveillance as a Surveillance-Situationist Inquiry," from Wikimedia Commons.)