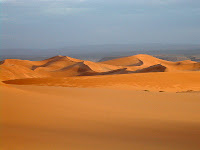 Many of our Northern Hemisphere readers are likely pretty sick of snow right now. But at least you’re not dealing with digging your car out of snow in the desert.

On February 18 in 1979, snow fell on the Sahara Desert for the only time in memory. According to the New York Times, in Southern Algeria the snow completely stopped traffic. In a few hours, the snow had melted. In the Saharan mountain ranges, snow is a little more common – falling once every three to seven years. Still, it’s not a bad place to move to if you’re completely sick of the white stuff.

Mountan is a moderate probability typo for mountain, occurring over 100 times in WorldCat. Watch out for mountian as well, which occurs even more frequently.