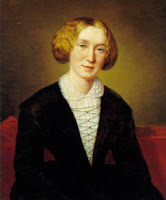 Eliot is a great name, as is George, but the English author George Eliot was actually given the name Mary Anne Evans at birth. She had originally planned to write under her own name (possibly shortening it a bit to Marion), but ultimately adopted an unequivocally masculine pseudonym so as not to be dismissed as a mere romance writer or worse. In 1856, she published an essay in the Westminster Review, caustically expressing her views on the matter, entitled "Silly Novels by Lady Novelists." She was generally considered unmarriageable, due to her infamous failure of pulchritude, so her father agreed to have her educated instead. Eliot learned to think for herself, eventually declaring herself an atheist, and engaged in a series of unconventional romantic relationships (including a 20-year domestic arrangement with a married man in an "open marriage," along with another marriage to a man 20 years her junior). She also produced seven novels (Virginia Woolf called Middlemarch "one of the few English novels written for grown-up people") and a great many poems and essays. Today's compound typo comes up 161 times in OhioLINK; a best estimate is that approximately two-thirds of these involve at least one misspelling of the name Eliot* or Elliot*. (The rest contain the names of two different people, both spelled correctly, or in some cases involve either a [sic] or an [i.e.].) Take care today to see that this name has been correctly transcribed in your own catalogs. As George Eliot writes in the book Silas Marner: "Nothing is so good as it seems beforehand."