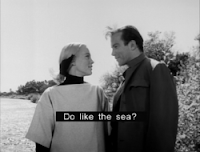 Expañol* is a high probability typo on the Ballard List, occurring over 340 times in Worldcat.

When I first saw the error, I thought it was an invented language, like Esperanto. Perhaps an expansion of Español to include slang terms from other languages? Or a code word for a plot by Spaniards to expand and take over the world?

Though I'm happy as long as the plans of our Expañol friends don't involve making a horror film as bad as Incubus, which was written entirely in Esperanto. Incubus starred William Shatner, who bizarrely pronounces his Esperanto with a French accent.

(Image from Incubus taken from Wikipedia)

It's not really that odd for Shatner to speak Esperanto with a French accent. He grew up in Montreal, Canada.