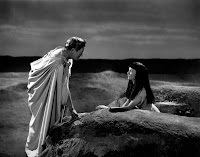 I took part in a "potluck Scrabble invitational" at a coworker and neighbor's house over the weekend and, though I promptly and predictably lost the game, I did learn a cool new word in the process. The Scrabble dictionary is an interesting reference work. It excludes "four-letter words," racial epithets, and certain other examples of offensive slang, but at one point I did manage to put down swear itself. Since the rules we were playing by allowed for a rather liberal use of the dictionary, it was there that I stumbled upon said cool word. And the next time I actually do stumble, I'll have to remember to use it! Gor, it seems, is a "mild oath" or what's also known as a minced oath. Amazingly enough, when I mentioned this find to my fellow players, the hostess replied that she had actually heard it used just the other day in the 1945 film Caesar and Cleopatra, starring Claude Rains and Vivien Leigh. No way, I thought, or rather, "Gor!" (I love a great coincidence like that.) There were nine hits on Caeser* + Caesar* in OhioLINK, and 35 on Caeser* alone (172 and 620, respectively, in WorldCat). Some, however, look as though they might be early variant spellings (such as Zealous beleevers are the best subjects to Cæser...), so be sure to check the original works for any of these you might also find.

(Still from the film Caesar and Cleopatra, courtesy of the website Acidemic.)

You were using a 'student dictionary' There is an unexpurgated official Scrabble dictionary used in tournament play. It includes all manner of off-color words such as 'whore'- 14 points!