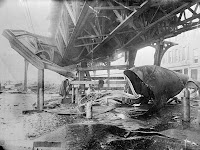 Massachusetes, not surprisingly, is under Section B, High Probability, of the Ballard list. Not only is the state hard to spell, but "molasses," the sweetener that was the cause of a major disaster in Boston is pretty darn tough for some of us, too. The Great Molasses Disaster happened on January 15, 1919. Twenty-one people were killed and 150 injured when a tank containing 2,300,000 gallons of the sticky stuff exploded, sending a 40-foot wave into the surrounding area with enough force to knock buildings off their foundations and break girders for the elevated train. The molasses traveled at 35 miles per hour (which answers the question about molasses in January) and either completely covered those in its way or picked them up as though they were body surfing. It took 300 people two weeks to clean up the mess, but the litigation went on for three years. For more on this, see the Wikipedia entry. For a lot more on this, see The Dark Tide by Stephen Puleo.