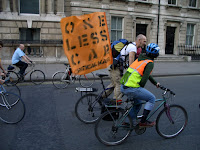 Perhaps you were at the store yesterday, picking up a few ingredients for a hangover cure or grabbing a quick bite to eat and were in a hurry to get in and out. If so, you may have found yourself standing in a checkout line with a sign reading "Ten Items or Fewer." This, as we all know, is more grammatically correct than its longtime predecessor "Ten Items or Less" (less refers to an aggregate amount and fewer to numbers of individual things, whereas more covers both), but it doesn't sound quite as satisfying. There's just something about shorter words that, all things being equal, makes them preferable to longer ones. This is true of speaking as well as writing. For example, "2012" is going to be easier and pleasanter to say than "2011" was. (It's not only the fewer syllables involved, but the agreeable alliteration as well.) So have a happy, pithy New Year—or, should you prefer, a Tweety 2012! And always remember that less is more (although when it comes to typos, that really should be fewer). Today's typo was found seven times in OhioLINK (all errors except for Less's Authenticity, Uncorrupted Preservation, and Credibility of the New Testament) and 1288 times in WorldCat. Lessen the impact on your own catalog by extracting, where necessary, that extra S in Lesss*.

I wonder when that rule about less vs. fewer was legislated. It doesn't seem to have been in force when they wrote the words to "Amazing Grace."