Revov* (for Revolv* or Recov*) 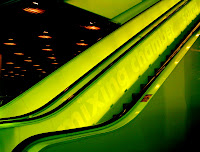 See you later, escalator! But first I need to inform the powers that be near the place where I work that they've got a misspelled sign on their hands pointing visitors in the direction of the "Escaltor to Museum Lobby." Much like elevators, in the famous joke I made up myself, these things really "drive me up a wall." I mean, just how little regard does one have to have for the work of editors and proofreaders to neglect to run a bit of text by at least one other person (or an automatic spell checker) before sending it off to be carved in stone (or whatever the modern-day version of that, involving electroplating or galvanization or enamalizing, etc., might be). I couldn't find any typos for escalator (or elevator either, for that matter), but I decided to do a little research on them anyway. According to Wikipedia, Nathan Ames of Saugus, Massachusetts, patented the first design for what he called a "revolving staircase" in 1859. And it was all downhill (or maybe that's uphill) from there. Thirty years later, Leamon Souder patented another escalator-type "stairway" and in short order several other models followed. Weary riders of such things are no nudes descending a staircase, but their evolution does represent a revolution in getting around. When the first "moving staircase" was installed in Harrods Knightsbridge store in England on November 16, 1898, "customers unnerved by the experience were revived by shopmen dispensing free smelling salts and cognac," according to Bill Lancaster in The Department Store: A Social History. This typo seems to refer to words like revolve and revolution about as frequently as it does words like recover or recovery. There were five cases of Revov* in OhioLINK, and 150 in WorldCat.