Nora + Norah (for Norah or Nora) 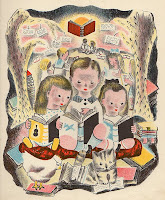 Norah Woodson Ulreich, known to her reading public simply as Nura (a nickname invented by her husband, Eduard Buk Ulreich, because he "never calls people by their right names") was a children's author and illustrator born in Kansas City, Missouri, in 1899. I discovered her work for myself amid a privately owned "lot" of books I bought a few months ago on eBay. Her stories are sweet, but rather odd. In the two Nura books I now possess—All Aboard, We Are Off and The Mitty Children Fix Things—the (two different) female protagonists both end up somehow owning and knowing how to fly a plane, and giving the various children in these stories airplane rides. It makes me wonder whether Nura herself had a pilot's license, but I haven't been able to determine that: there really isn't a lot of biographical information about her online. Here's what I did find, though. Norah Woodson studied art at the Kansas City Art Institute and the Art Students League in New York City. She met her painter husband in Chicago (Eduard had been born in Austria in 1889 and moved to NYC with his family as a child) and the pair eventually settled into a studio apartment in Manhattan. They would sometimes create murals together for the WPA, signing them "Bukannura." They never had any children, however, as Nura explained that "a real one might engross her to the point that she could not paint imaginary ones," according to a Time magazine review of her 1934 book Under the Buttermilk Tree. While there may have only been one Nura, there are plenty of Nora's in the world, some of whom spell their name Norah. There were 14 hits on today's combination typo in OhioLINK, exactly half of which were records containing two differently spelt names for two different people. There were also 288 cases in WorldCat, in presumably the same approximate typo to non-typo ratio.

(Illustration from Nura's 1944 book All Aboard, We Are Off, from the Carol Reid collection. Here the children learn a lesson about moderation in all things as they visit a land where the people do nothing but read all day long!)