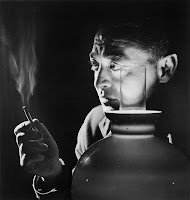 In the Fritz Lang movie of the same name, starring the marvelous Peter Lorre, the letter M stands for Mörder (meaning "murderer" in German). But in this case it's merely the middle letter of our typo for the day, as well as the middle letter of the alphabet itself—one that is very often misused and misplaced. (Note the way I set off that last phrase with what's known as an em dash, so named because it takes up about the same width as the letter M on a typewriter key—cf. the en dash.) I'm reading an interesting book right now entitled Popular Crime: Reflections on the Celebration of Violence (2011). Author Bill James writes about cases as disparate as those of Leo Frank and Mary Phagan, the so-called "Black Dahlia," the Scottsboro Boys, O. J. Simpson, Sam Sheppard (the putative source for the TV show "The Fugitive"), Sid Vicious and Nancy Spungen, Randall Dale Adams (upon whom the first film by Errol Morris, The Thin Blue Line, was based), Katherine Ann Power, the Lindbergh Baby, the McMartin Preschool, the Menendez Brothers, JonBenet Ramsey, and a great many others, cases both utterly notorious and far more obscure. He states: "We are, not as a nation but as human beings, fascinated by crime stories, even obssessed with them. The Bible is full of them... And yet, on a certain level, we are profoundly ashamed of this fascination." There is nothing to be ashamed of, but something to be fully investigated, in the fact that there were five cases of both Crimnal* and Crimimal* in OhioLINK today (66 and 46 in WorldCat) and just one of Crininal* (17 in WorldCat).