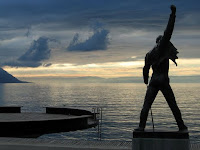 November 24, 1991 is the anniversary (not anniversay) of the death of Queen frontman Freddie Mercury, from pneumonia brought on by AIDS. While Mercury was not open about his HIV status until the day before his death, his experience and subsequent AIDS awareness tribute concert put on by Queen did a lot to raise awareness of the disease.

Mercury is also considered by Time Magazine to be one of the most influential Asian heroes of the past century, Rolling Stone ranked him as one of the top 20 singers in rock and roll--incredible achievements in his too-short 46 years of life.

(Statue of Freddie Mercury in Montreux, Switzerland - photo from Last.fm)