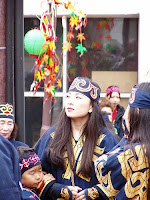 The Ainu are an indigenous people of Japan. However, they were not recognized by the Japanese government until 2008. Their origins are unknown, but due to differences between their physical features and the Japanese ethnic majority—fair skin, long hair/beards, large bone structure—it has been speculated that they descended from the people of the Jomon period. The Ainu religion is shamanistic; the bear is especially revered. In the 1800s, the Japanese government tried to erase the Ainu culture by forcing them to change their names and send their children to Japanese schools. They could not speak their own language. Today there is a revival of Ainu culture in Japan. Many of the lost generation are learning their heritage and language. Public dances and festivals are held, such as the theatrical staging of the iyomante ritual (bear sacrifice) and the Marimo (Spherical Algae) Festival.

Japanse* appears in the Moderate Probability section of the Ballard List. A keyword search in OhioLink returns 68 entries. Most of these items look like they are in Dutch. Several online Dutch translators convert Japanese to Japans/Japanse. Consult your favorite Dutch speaker for accuracy.

I read that the word aborigine refers to the indigenous race of any country, as opposed to just Australia which i had previously thought.

I had never heard of this race either- thanks for sharing.

You might want to check your own spelling on your About Me, favorite bands.

...sometimes the lights are shinin' on me

Interesting, I have never heard of The Ainu people. I would love to visit Japan one day and learn about its different cultures and languages. Loved the post, and thanks, I learned something new today. :)

Removing that 'e' seems to totally deflate the sound of the word. Or possibly deflat it.

Now THAT is funny typo!