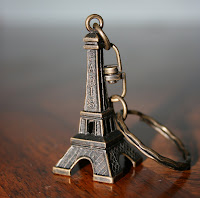 The word souvenir comes from the French for memory and means "memento or keepsake; an object a traveler brings home for the memories associated with it." The Eiffel Tower was the key to the 1878 Exposition Universelle and has served as a symbol of Paris ever since. In So Long at the Fair, the 1950 British thriller starring Jean Simmons and Dirk Bogarde, extraordinary measures are taken to prevent people from panicking in the streets, setting off an escalating chain of events, and fleeing the city. The title comes from the nursery rhyme that goes: "Oh dear, what can the matter be? Johnny's so long at the fair..." The mystery is not unlocked until the final moments of the film, which has a wonderfully Hitchockian flair. I won't say any more in case you haven't seen it yet, but here are a few other things I learned about the 1878 World's Fair. While the fair revolved around the tower, it also exhibited some other remarkable sights, such as the head of the Statue of Liberty, various inventions by Alexander Graham Bell and Thomas Edison, and even, per Wikipedia, "a human zoo, called a 'negro village,' composed of 400 'indigenous people.'" The exposition also gave rise to a series of meetings eventuating in the formulation of international standards and copyright law, the standardization of mail flow from one country to another, and the universal adoption of Braille. Souvenier* appears 28 times in OhioLINK and Souveneir* twice.

(Keychain of the Eiffel Tower, from Wikimedia Commons.)

Errata: A reader writes in to correct an error by pointing out that the film was about the 1889 exposition, not the 1878 one. (There were expos in Paris during each decade of the last half of the 19th century and beyond.) Apparently, the "negro village" continued to be the main attraction in 1889, but the other details mentioned above pertain to the 1878 fair, not the 1889 one that introduced the Eiffel Tower.
Posted by librarytypos at 5:00 AM

Thanks for posting these! I'm definitely a word nerd, so I love "word of the day" type bulletins. Your posts will definitely be added to my list of sites to check daily!

In the first place, it wasn't the 1878 World's Fair, it was the 1889 Paris Exposition. I failed to see the mistake in the summary you gave of the film (except that you seemed to be trying to give away the ending).

Most librarians can't spell...well, the one I know can't, but he has various other gifts that more than make up for this failing.

I do regret to inform you that your profile does have a typo, however: Garfunkel, not Garfunkle.

As a Hitchcock lover, I will simply have to see that movie. :o)

I am not a librarian but i enjoyed your post. I am huge fan of hitc's movies if its similar i'll try to get it.

this is great, i love your blog! how do i follow it so that it shows up on my reading list?

Julie: Thanks for the correction. Please see the errata I added to this post.

Nicole: Those musician names, etc., were purposely included as examples of typos and were culled from other blogs.