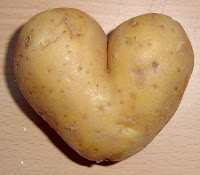 Michael Pollan's book The Botany of Desire was the basis for a recently aired program on PBS, which purported to show how "four familiar species—the apple, the tulip, marijuana, and the potato—evolved to satisfy our yearnings for sweetness, beauty, intoxication, and control." Yeah, I thought upon reading that, the potato is kind of controlling. Think about it. It's got all those eyes watching you all the time. It goes with almost everything: "Do you want fries with that?" And, unlike the more live and let live tomato, it can carry the dreaded "late blight" over from one season to the next—something I learned this year as a novice community gardener. Plus, of course, it won't let you hold the remote when you're sitting on the couch. One potatoe, two potatoe, three potatoe ... make that 33 of 'em recently in OhioLINK. Some of them are probably written that way on the piece itself; others may be variant spellings from the 1700s. (Dan Quayle spelled it like that, even though he was only from the 1990s.) When the word is plural it correctly takes an e. My favorite potato "poem" was found on a shipping box in the local food co-op. I think it went something like this: Yucca Taro / Sweet Potato / Ruby Taro / Beet Batata... You say po-tay-to, I say po-tah-to, let's leave the last e off!

(Heart-shaped potato from Germany, dug up on Wikimedia Commons.)

I think it makes perfect sense to spell it without the e. I mean it does correctly take it on anyways when it is plural, but what is the use of it in the singular form? Plus I'd much rather embrace my southern anglo roots and say it "potato."