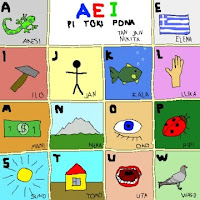 Pronouncia* is our typo for the day. It occurs 59 times in OhioLINK, registering as "high probability" on the Ballard list. (Pronuci* is found there 12 times and Pronouc* nine times.) Depending on how you look at it, Toki Pona is a feel-good, prescriptive, politically correct, minimalist, or Zen-like form of communication. It was introduced in 2001 by Toronto resident Sonja Elen Kisa. This Esperanto-like language contains a mere 123 words and 14 sounds. Feminists may be drawn to it for its lack of gender-specific pronouns. Toki Pona is sometimes referred to as "the simple language of good." However, there are people who find it a little too good to be true and have compared it to George Orwell's "Newspeak." I'd like to be able to report that there are no typos in Toki Pona, but I fear that might be painting a bit too sunny of a picture as well.

Pardon me, what is OhioLink? A mag or something?

OhioLINK is the Ohio State Library's online catalog. We use it as a gauge for determining how common a given typo may be. It was the catalog used by the librarian who originally came up with the idea for this blog.