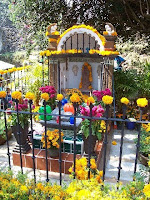 Today marks the conclusion of the Mexican festival Día de los Muertos (Day of the Dead), which is celebrated nationwide on November 1-2. According to the Consejo de Promoción Turística de México (Mexico Tourism Board), this holiday is “the most colorful annual festival on the Mexican calendar, commemorating departed loved ones. During this festival, the dead have divine permission to visit friends and relatives on earth. The living welcome the souls of the departed with offerings incorporating their favorite foods and beverages, as well as marigolds and candles. The Day of the Dead celebration is particularly memorable in the states of Oaxaca and Michoacan, as well as in Mexico City.”

With roots in Mexico’s pre-Hispanic days, the festival was originally celebrated during the ninth month of the Aztec calendar (around August) and was dedicated to the goddess Mictecacihuatl, known as “Lady of the Dead.” Later, after the arrival of the Spanish, the festival was moved to coincide with the Roman Catholic feasts of All Saints and All Souls. Common offerings (ofrendas) to the dead include sugar skulls and pan de muerto, a sugary sweet bread decorated with bones.

Mxic* is listed as a typo of low probability, but there are currently 18 English-language instances of it in OhioLink. One is correct (MXIC as an acronym). Another two were baffling until the MARC format was viewed—each record contained a subject heading coded for unspecified thesaurus (650 with second indicator “4” in “MARC speak”), which appears to be indexed, but not displayed, in that catalog. I surmise that most of the other errors can be traced back to the importing of diacritics, because they seem to occur in Spanish language strings where “México” came through as “Mxico.” (The same keyword search limited to Spanish will retrieve other words lacking accented letters.)