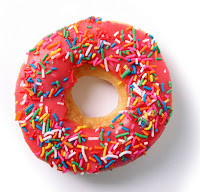 Celiac Disease is a lifelong, inherited autoimmune disorder activated by eating gluten—the proteins found in all forms of wheat (durum, semolina, spelt, kamut, einkorn, faro) and the related grains rye, barley, and triticale. When someone with CD eats foods containing gluten (even tiny amounts), it triggers a toxic reaction causing damage to the small intestine and preventing nutrients from being properly absorbed. Symptoms can include gastrointestinal irregularities, unexplained weight change, anemia, bone or joint pain, depression, irritability, and fatigue.

According to the Celiac Disease Foundation, the disorder affects one out of 133 people in the United States and 1 percent of the population worldwide. Yet 97 percent of them—men, women, and children—remain undiagnosed. Sobering information for those of us who engage in the morning ritual of coffee and a favorite breakfast pastry!

Disordr* is a low-probability typo on the Ballard list with 7 English-language entries in the OhioLink database. However, be careful when making corrections in your own catalog, because most of these appear in records for early English books, when “disordrely practise” and “disordred persons” were apparently common. (According to the Oxford English Dictionary, the modern word derives from the old French verb “desordener”and noun “desordre.”)

(Doughnut by nazreth, from the Stock.XCHNG photo site)

if after all these years im diagnosed with celiac disease, i'd be devastated!!!??