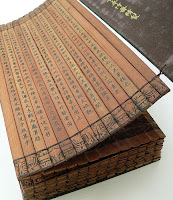 Perhaps the catalogers who made this typo had work-related issues on their mind. Cataloging departments regularly face hurdles such as adjusting to a new or updated version of an integrated library system, and managers have the task of readying their department for change. Theories such as sociologist Kurt Lewin’s Change Theory and psychologist’s Abraham Maslow’s Hierarchy of Needs help managers understand the processes of change and the motivations of employees. If Eastern philosophy is more your thing, there’s The Art of War by Sun Tzu, a Chinese military handbook that has gained popularity in the West as a model for management. It advises that “to fight and conquer in all your battles is not supreme excellence; supreme excellence consists in breaking the enemy's resistance without fighting.”

The phrase “Away in a manager” appears 15 times in OhioLink, placing it in the Moderate Probability section of the Ballard List.

(bamboo binding of The Art of War http://www.flickr.com/photos/bluefootedbooby/ / CC BY-NC-ND 2.0)