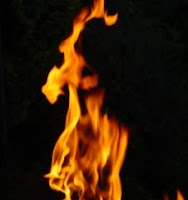 Before the discovery of oxygen, 18th century scientists believed in the phlogiston theory: all combustible substances contain phlogiston, a mysterious substance that is freed during burning. When wood, for example, is burned, phlogiston escapes and ash remains. Phlogiston was also used to explain the oxidation of metals—rusting occurred when phlogiston was lost to the air.

What made this theory unlikely to some was the difference in weight: when wood burns, the remaining ash weighs less (implying that the escaping phlogiston has some mass) while when metal oxidizes, it does not.

With the discovery of the element oxygen, this theory was discredited by Antoine Lavoisier in the late 1700s. It makes me wonder just how many beliefs we hold today that may one day be proven wrong.

Oxgen is a low probability typo for oxygen.