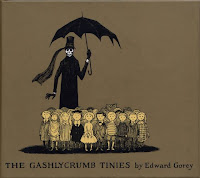 Edward (St. John) Gorey is an American author and illustrator most often associated with the macabre. Nowhere is this more apparent than in his abecedarian, or alphabet, book The Gashlycrumb Tinies, first published in 1963. In fact, one could call this the original “Series of Unfortunate Events,” with 26 children all meeting ghastly or even absurd ends. In verse, no less, as this couplet illustrates:

Gorey wrote or illustrated around 100 books, including at least five other alphabet ones (The Fatal Lozenge, The Utter Zoo, The Chinese Obelisks, The Glorious Nosebleed, and The Eclectic Abecedarium). His creepy cartoons (animated by Derek Lamb) have adorned the credits of the PBS series Mystery! since it began airing in 1980.

Alaphabet* is another low-probability error with 5 OhioLink English-language results. There are additional French (alaphabétique) and German (alaphabetisch) entries, and if you look, you just might find some lurking in your own catalog.

(Cover art for The Gashlycrumb Tinies, from Wikimedia Commons)

I love Edward Gorey and taught my kids his alphabet, which caused quite a lot of head turning and tsk-tsking by adults who thought I was a bad mother.