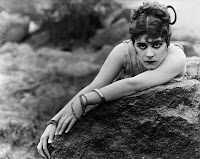 Theda Bara, born Theodosia Burr Goodman, was the original movie "vamp" (short for vampire and slang for sexually predatory female). Bara, along with Valeska Suratt and Musidora, popularized this femme fatale persona during the early days of the silent screen. Her stage name has become a household word, but its origins are a matter of some debate. The Guinness Book of Movie Facts and Feats claims it came from director Frank Powell, who had discovered she had a relative named Barranger. However, those of a more exotic turn of mind at the time imagined it to be an anagram for "Arab Death." The Goodman family legally changed its surname to Bara in 1917. Check your catalogs carefully and legally change all instances of Barabara to Barbara—although you should probably check the works in question, per usual, if the occurrence is in a transcribed field. We found 54 of these twin-vamped typos in OhioLINK today, and over a thousand in WorldCat.

(Theda Bara in Carmen, a lost film made in 1915, from Wikimedia Commons.)