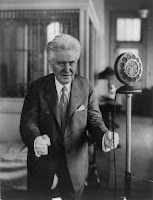 As evidenced by the performance of the "Fab 14" (Democratic senators who stood with the unions and against Governor Walker and what some protestors are now calling the "Repugs"), Wisconsin has had a long and proud history of progressivism. But how things are going to go for workers in Iowa, Idaho, Indiana, Ohio, and Michigan at this point is anybody's guess. Robert La Follette, Sr., was a Republican governor, congressman, and senator from Wisconsin in the early twentieth century. He also ran for president on his own "Progressive Party" in 1906 and got 17% of the vote. According to Wikipedia, La Follette is "best remembered as a proponent of progressivism and a vocal opponent of railroad trusts, bossism, World War I, and the League of Nations." He was also the founder of The Progressive, originally called La Follette's Weekly, in 1909. The magazine's name was changed in 1929 and continues to inspire progressives today. There were 30 examples of today's typo in OhioLINK as of this morning, and over 400 in WorldCat.