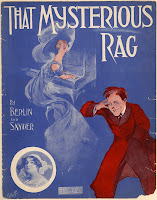 Ah, sweet Myteri* of life, at last I've found you ... eight times in OhioLINK, that is, and 127 times in WorldCat! (Some of those may be correctly spelled foreign words, but most, I believe, are typos.) According to Gershwin biographer Howard Pollack, Irving Berlin's "That Mysterious Rag"—along with "Alexander's Ragtime Band" and "Everybody's Doin' It Now"—effectively popularized ragtime music for the middle-class white masses. Prior to that, it had been considered such a distinctly black musical genre that it only rarely included lyrics and cover art of other minorities, such as Jews and Italians, where it was an occasion for buffoonery. But this mysterious whitewashing of ragtime a hundred years ago did not go over that well with everyone. Richard Crawford writes: "It would be hard to find another Berlin song with one-syllable words so awkwardly stretched or natural declamation so bent out of shape." And T. S. Eliot satirized the song thusly in his poem The Waste Land:

O O O O that Shakespeherian Rag—
It's so elegant
So intelligent....