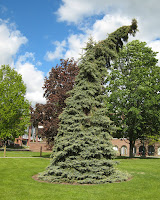 Yesterday was the 87th birthday of Theodor Geisel, more commonly known as Dr. Seuss. And today was the day I decided to walk down to the DMV on my lunch hour to renew my driver's license. It was cold and crisp and clear out, so I took my digital camera along to photograph the sights—mostly old buildings and trees and pigeons and such, but you never really know what you'll see! A woman with two little kids spied me happily snapping away and asked me (in a not altogether unfriendly way) just what it was I was taking pictures of. Oh, nothing in particular, I replied, just interesting stuff I might see on my way to Motor Vehicles. I should have added that I was paying tribute to Dr. Seuss's very first book, And to Think That I Saw It on Mulberry Street. I was heartened to learn that the author had nearly burned this classic of children's literature after seeing it rejected something like 43 times—but did not. (Vanguard Press, bless its visionary heart, finally published it in 1937.) After talking earlier in the day with a brilliant colleague who is facing the same sort of difficulties, it was good to be reminded that talent and persistence can eventually pay off. We found 29 instances of today's typo in OhioLINK, although a certain number of those involved proper names and other false hits. Stay on track and you should be able to fix a few street signs in your own library's catalog.

(The "Seuss Spruce" growing in the quad of SUNY Geneseo in Geneseo, New York, so named due to its unusual shape and resemblance to one of the fantastical plants envisioned by Dr. Seuss, from Wikimedia Commons.)