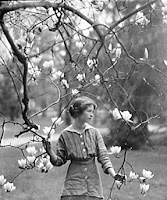 Edna St. Vincent Millay received her lilting-sounding middle name by virtue of the fact that her uncle's life had been saved at St. Vincent's Hospital in New York City shortly before she was born. A headstrong and free-thinking child, Millay decided she preferred to be called "Vincent" rather than "Edna"; her grade school principal, however, refused to comply with such an outlandish request, in his view, and stubbornly, if rather whimsically, chose to call her any girl's name he could think of that started with a V instead. "Hey, Vera! Oh, Violet! Come here, Valerie! Vanessa!" What a hoot. I can just picture her standing there stolidly on the playground, with an uncomprehending look on her face. It appears that the Pulitzer Prize winning poet had a predilection for pseudonyms, later employing "Nancy Boyd" for her works of prose. (Just don't call her "Nancy Girl," eh?) We found 16 examples of Vicent (for Vincent) in the OhioLINK database today. We'll call it a V for Victory if you can find some of these typos in your own catalog as well.

Of course the Spanish version of 'Vincent' is 'Vicente.'