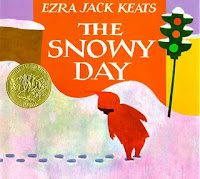 Today is likely to be a Snowy Day wherever you happen to be. It also happens to be the birthday of Ezra Jack Keats, born Jacob Ezra Katz on March 11, 1916, in Brooklyn, New York. Keats won the Caldecott Medal in 1963 for a classic work of children's literature called The Snowy Day. The book features a young African-American boy named Peter, who reappears in six other books later on. Black characters were rare in children's books at that time; Keats says he got the idea to write about one from a 1940s issue of Life magazine. Keats grew up poor and, unable to afford art supplies, worked with scraps of wood, paper, and cloth instead. This ultimately led to his distinctive collage style of illustration. He illustrated a total of 33 books, 22 of which he also wrote. Always sensitive to prejudice and discrimination, he changed his name after World War II to "Ezra Jack Keats"—turning Jacob into "Jack" and Katz into "Keats." But he kept the Ezra. We found five cases of Ezra + Erza in OhioLINK today.

(Book cover for The Snowy Day, from Wikimedia Commons.)