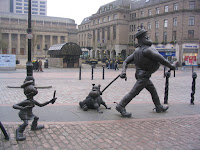 I was desperate for a typo today and an email correspondent proved equally so, though for a much different reason. So much so, in fact, that he misspelled the crucial word as Desparate and then neglected to use the spell checker before hitting "Send." This simple act of desperation, however, worked out pretty well for both of us. He made his point with urgency and poignancy, and I got my typo. It turned up 64 times in OhioLINK, but a dozen or so of those seem to suggest an antiquated spelling. (I realize I could have written about that top-rated TV show for housewives here—and it's not that I think I'd have to be really desperate to do that—it's just that I've never seen it.)

(Desperate Dan, the British cartoon character, with his faithful pet Dawg in tow and stalked by a life-size version of Minnie the Minx, in Dundee, Scotland. Rumor has it that the citizens of Dundee were asked if they would like a statue of Winston Churchill, but they said they would prefer Desperate Dan.)