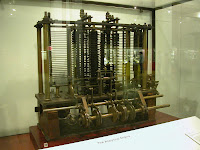 The Analytical Engine was a design for a mechanical general-purpose computer, which was formulated by English mathematician Charles Babbage in 1837. It was a follow-up to his design for what he termed the "difference engine," a mechanical calculator. Babbage was never able to actually build either of these machines due to clashes with his chief engineer and a lack of government funding. Numerous attempts have been made over the past century and a half to bring this design to fruition, but perhaps most interesting of all have been the many works of fiction about it, most of them written in the 1990s. It's thought that had the Analytical Engine been built during Babbage's lifetime, it would have proved superior to computers that were developed in the 1940s—although it would have been quite a bit slower. Mathematician Ada Lovelace wrote: "Mr. Babbage believes he can, by his engine, form the product of two numbers, each containing twenty figures, in three minutes." While you're on hold with an unresponsive PC and an even more unresponsive overseas call center, check out this hilarious cartoon correspondance between "an unhappy Analytical Engine owner and the South Asian Technical Support Corporation" on Saturday Morning Breakfast Cereal. We calculated 47 hits in OhioLINK and over 800 in WorldCat on today's typo.

(Trial model of part of Charles Babbage's Analytical Engine, on display at the Science Museum in London, May 2009, from Wikimedia Commons.)