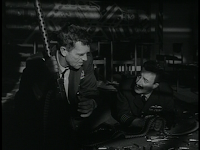 This was the very first entry I posted to our fledgling blog, Typo of the Day for Librarians, back in 2006. It is no longer retrievable from the archives, though, so I thought I would reprise this ever-flourishing typo today. (There seem to be even more now than there were five years ago; I have included the current stats in brackets, along with the original ones.)

In Dr. Strangelove or: How I Learned to Stop Worrying and Love the Bomb, General Jack D. Ripper fears that the Commie influence of fluoridation will "sap and impurify all of our precious bodily fluids." We might well worry about something similar in the persistent misspelling of words beginning with the letters FLUOR, such as fluoride, fluoridation, fluorine, and fluorescent. Their transposing imposters—Flouride, Flouridation, etc.—continue to seep insidiously into the OPAC supply despite our best efforts to flush them away. A recent English-language search on OCLC turned up 161 [269] titles containing Flouride, 29 [48] titles containing Flourides, and 28 [48] titles containing Flouridation. (Among them, only three [one] indicated that the error was transcribed from the work itself.) Twenty-five [~40] records revealed one of them as the first word in the title. Another search found 32 [28] records with these typos in the subject fields. There were also 22 [~30] titles beginning with the words Flourinated or Flourine and 43 [~80] beginning with Flourescence or Flourescent. The example of Flouride et al. is important to review periodically for several reasons: 1) It is likely to appear in the first, or first few, words of a title; 2) The error itself exists within the first three letters of the word, which means that the misspelling could even affect a "derived" search in which only the first three letters of the first word are involved; 3) It's a very common typo, appearing in the "high probability" section of the Ballard list; and 4) Fluoridation has always been and continues to be a controversial political, environmental, and public health issue; therefore materials on the subject should be made as accessible as possible.