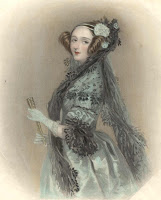 Yesterday, I told you a bit about Charles Babbage, the inventor, in a sense, of the world's first computer. Someone who took a great deal of interest in this endeavor was Ada Lovelace, who was Lord Byron's "only legitimate child." Ada had been schooled in mathematics from a very early age, partly in an attempt by her somewhat embittered mother to ward off the "insanity" she feared may have been passed on to her by her profligate poet pappa. This was most likely a misguided effort, however, given that there seems to be more madness found among mathematicians than in people who are not obsessed with numbers. In any case, Ada proved to be a talented, if level-headed, one and worked closely with her friend and colleague Babbage. She has been dubbed "the world's first computer programmer" and the programming language ADA was named after her. Notwithstanding progranulin, which is some sort of "growth factor" genetic-type thing, and the Russian word Progranichnyi, which appears to be a Russian proper noun, today's typo was discovered ten times in OhioLINK and 430 times in WorldCat.

(Scanned from a picture found "in the trash" in Lousianna [sic], USA, and submitted it to the Ada Picture Gallery in October 2000 ... an orginal print from its time, not a reproduction. You can read more about this picture at Wikimedia Commons.)

it's true there is a madnessin mathmeticians - I have seen it first hand.