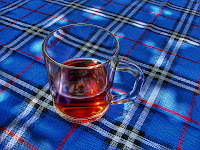 It rained on Saturday, it rained on Sunday, and it's raining today. They say it's going to rain all week. But precipitation, condensation, flash floods, rainfall, drizzles, downpours, sprinkles, storms, and April showers bring May flowers, so I'm really not complaining that much (although, nota bene, this is May already). Anyway, it's kind of nice to stay inside and read a book or otherwise cocoon, while slowly sipping a nice cup of tea. Make sure your beverage is not pre-sipped, however; timing is everything when it comes it to making tea. The tea plant contains both caffeine and tannins; the former excite you, while the latter relaxes. If you want to lessen tea's stimulating effects, you should let it steep a while longer in order to activate the slower-releasing compounds. Rudyard Kipling once wrote:

We had a kettle; we let it leak:
Our not repairing made it worse.
We haven't had any tea for a week...
The bottom is out of the Universe.

We found five cases of today's typo in OhioLINK and 171 in WorldCat. (Watch out for the properly spelt preciptin, though). This is not a typo of precipitous proportions, but little drops can become a deluge, so take a moment on this rainy day (and Monday) to repair any leaks before they're made worse. Then after that, if you've got a mind to, go and make yourself a hot cup of tea.

I just realized that this typo has been blogged before, as has its cousin Precipation. Thus, permit me to add a few more "low probability" variants to today's rainy rerun: Precipitaton (two), Percipita* (one), and Pricipit* (one).