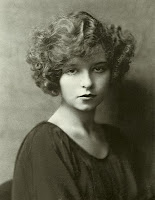 Personal computers had not yet been invented in the 1920s, but telephones had been, and Brooklyn-born Clara Bow was the recipient of a great many calls and letters: she was the notorious IT Girl of her day. Based on a Cosmopolitan story by Elinor Glyn in 1927, "It" was a bit more nuanced than you might think, being "that strange magnetism which attracts both sexes ... a purely virile quality ... belonging to a strong character ... full of self-confidence ... indifferent to the effect ... uninfluenced by others." "Beauty is unnecessary," continues Glyn. "Conceit or self-consciousness," however, "destroys 'It' immediately." Despite an impoverished and difficult childhood and a youthful career filled with exploitation and ridiculous innuendo, Clara proved to be both tough and rebellious; she had what "It" took to survive. There were five cases of today's compound typo in OhioLINK and 36 in WorldCat.

(Picture of Clara Bow at age 16, taken after she won a movie magazine contest in 1921, from Wikimedia Commons.)

Carol Reid
Posted by librarytypos at 9:40 AM