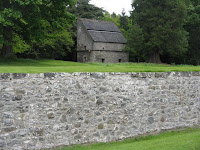 In the days before mechanical lawn mowers, animals such as sheep and deer were often relied upon to prevent the field grasses from getting too tall. ("Crop thy lawn, lady?" says a shepherd with his flock to a suburban housewife in a Charles Addams cartoon featured in the New Yorker on Aug. 16, 1941.) However, in order to keep such ruminants off of the lawn itself, something called a ha-ha would have to be built. It's a steeply graded retaining wall (meant to keep out animals while "retaining" the view), serving to separate the house and garden from the rest of the property. By this means, both grazers and gazers could be made content. The originator of the ha-ha is generally thought to be Charles Bridgeman, an early 18th-century garden designer, although others have been credited with the idea as well. The ha-ha was a common component of the "swept" views created by the marvelously named "Capability" Brown, who was also known as "England's greatest gardener." Horace Walpole suggested that the name for these walls derived from the reaction they would provoke: "The common people," he wrote, "called them Ha! Has! to express their surprise at finding a sudden and unperceived check to their walk." We found six cases of today's compound typo in OhioLINK and 85 in WorldCat, all of them inhibiting access to the records in which they appear.

(A particularly high ha-ha in front of the Newliston House in England, from Wikimedia Commons.)