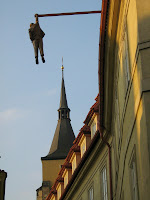 Sigismund Schlomo (otherwise known as Sigmund) Freud was born on this day in 1856. There is always a great deal to say about the "Father of Psychoanalysis," but somehow this quote from Wikipedia strikes me as the funniest and most Freudian thing of all: "Freud spent four weeks at the Austrian zoological research station in Trieste, dissecting hundreds of eels in an unsuccessful search for their male reproductive organs...." I mean, I know sometimes a cigar is just a cigar—and an eel is just an eel—but still, you gotta admit, that's funny. Maybe that's where he first came up with the idea of penis envy, no? We came up with six examples of Psychotherp* in OhioLINK and 65 in WorldCat today. Incidentally, I once had the pleasure of hearing Freud's granddaughter Sophie give a talk at the University of New York at Albany. She was a professor of social work at Simmons College, specializing in the use of bibliotherapy or "empathetic reading" and could actually recall sitting (and most likely being read to) upon the knee of her famous grandpappa. Happy Birtherapy, Sigmund Freud!

("Sigmund Freud Hanging," by the Czech artist David Černý, now also famous/infamous for his installation at the Council of the European Union, courtesy of Wikimedia Commons.)