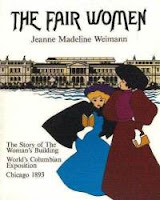 The 1890s were an exciting decade for women, who, although they still lacked the right to vote, were nevertheless moving ahead with alacrity, pursuing higher education, professional careers, and sexual and reproductive rights. However, their affairs were still considered a fair bit less important than those of men. The 1981 book The Fair Women: The Story of the Women's Building, World's Columbian Exposition, Chicago 1893 , by Jeanne Madeline Weimann, tells the story of a group of women who were given an inch, but took a mile. According to the book's dust jacket, Congress had "almost absently legislated a token women's board as a sop to women around the country who wanted a part in the Fair. The women themselves built the Board of Lady Managers into an impressive body which created not only buildings and exhibits, but made important contributions to knowledge through their Congresses and original research. Among the famous women who played a role in the drama of the Fair were the painter Mary Cassatt, Susan B. Anthony, Julia Ward Howe, Lucy Stone, Henrietta Szold, Jane Addams, Harriet Monroe, Frances Willard, Sarah Bernhardt, Clara Barton, Queen Victoria, Helena Modjeska, the African explorer May French Sheldon, the sculptors Vinnie Ream Hoxie and Harriet Hosmer, and the architect Sophia Hayden." Feminism is forever, but fairs are ephemeral. As one reverent reviewer on Amazon stated: "When I finally finished the book, I felt bereft, like the people who had worked so hard to put the fair on must have felt when it was suddenly just gone, like Brigadoon." There were 32 cases of Afair* in OhioLINK and 575 in WorldCat (some of which might be antiquated spellings).

(Cover of The Fair Women by Jeanne Madeline Weimann.)