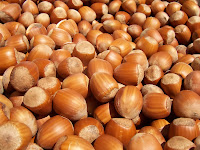 I am flat-out nuts for nuts of all sorts and, as with one's children, try not to make invidious comparisons among them since they're all quite nutritious and delicious in their own way. But I especially love the way hazelnuts are sometimes called filberts. If I ever get a pair of parakeets or goldfish or something, I just might name them Hazelnut and Philbert, which sound a lot like characters out of the funny pages. They look like something your Depression-era parents might claim they had to use for marbles since they were too poor to afford glass. And if you're wondering whether anybody has ever tried to build a better filbert, try the DuChilly kind, says Melissa Clark in the New York Times. Hazelnuts make a great flavoring for coffee and are commonly used in pralines, truffles, and tortes. They're also the nut employed in the chocolatey spread known as Nutella, first created in Italy during the World War II in response to the rationing of chocolate. Turkey is the largest producer of hazelnuts in the world, although on this continent, most of them come from Oregon and British Columbia. There were seven cases of Nutitio* in OhioLINK and 125 in WorldCat.