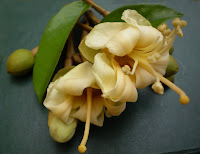 If something stinks in your library catalog, it could be the combination of Odor* + Oder* (the sort of search which often reveals one misspelling or another, but not always, particularly in the case of foreign words). The smelliest thing I've come across lately (in print, anyway) is the oft-praised, southeast Asian durian fruit, which, although being described in olfactory terms as resembling "pig-shit, turpentine, and onions, garnished with a gym sock" or if you prefer, "civet, sewage, stale vomit, skunk spray, and used surgical swabs," is reportedly, nevertheless, addictively delicious. You might want to bring along a Tic-Tac, though: "Your breath," says aficionado Anthony Bourdain, "will smell as if you'd been French-kissing your dead grandmother." British novelist Anthony Burgess once wrote that indulging in durian is rather "like eating sweet raspberry blancmange in the lavatory." Durian is known as the "King of Fruits" due to its hefty size and weight, and people are advised not to stand beneath these trees for danger of getting conked on the head with one. Predictably, it's also considered to have great nutritional and aphrodisiacal powers. We sniffed out eight cases of our odoriferous typo in OhioLINK today, and 148 in WorldCat.